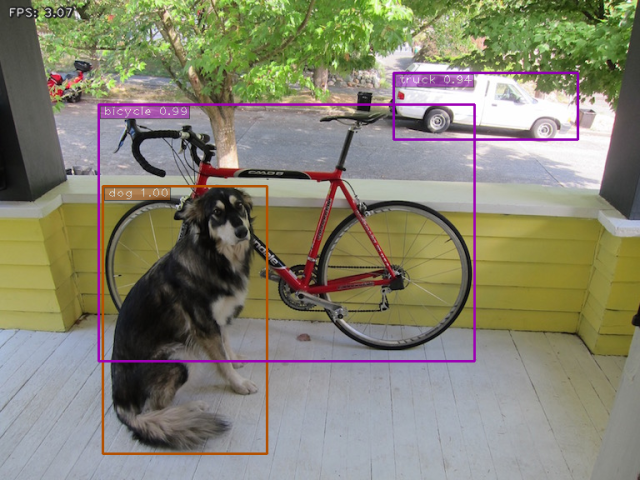 I wrote a blog post about YOLOv3 on Jetson TX2 quite a while ago. As of today, YOLOv3 stays one of the most popular object detection model architectures. Since NVIDIA already provided an Object Detection With The ONNX TensorRT Backend In Python (YOLOv3) sample code, I just adapted the sample with my “tensorrt_demos” camera/video input code and created a real-time TensorRT YOLOv3 object detector demo: Demo #4: YOLOv3.

For running the demo on Jetson Nano/TX2, please follow the step-by-step instructions in Demo #4: YOLOv3. The steps mainly include: installing requirements, downloading trained YOLOv3 and YOLOv3-Tiny models, converting the downloaded models to ONNX then to TensorRT engines, and running inference with the converted engines.

Note that this demo relies on TensorRT’s Python API, which is only available in TensorRT 5.0.x+ on Jetson Nano/TX2. So you’ll have to set up the Jetson Nano/TX2 with JetPack-4.2+. To re-iterate, JetPack-3.x won’t cut it.

As already stated in the README.md on my GitHub repo, you’ll have to install version “1.4.1” of python3 “onnx” module instead of the latest version. Otherwise, you’ll likely encounter this error: onnx.onnx_cpp2py_export.checker.ValidationError: Op registered for Upsample is depracted in domain_version of 10.

In addition, the “trt_yolo.py” demo requires the python3 “pycuda” package. Since sudo pip3 install pycuda always failed on my Jetson’s, I created this install_pycuda.sh to install it from source.

The download_yolov3.py script would download trained YOLOv3 and YOLOv3-Tiny models (i.e. configs and weights) from the original YOLO: Real-Time Object Detection site. These models are in darknet format and provided by the original author of YOLO/YOLOv2/YOLOv3, Joseph Redmon. Kudos to Jospeh!

The downloaded YOLOv3 model is for 608x608 image input, while YOLOv3-Tiny for 416x416. But we could convert them to take different input image sizes by just modifying the width and height in the .cfg files (NOTE: input image width/height would better be multiples of 32). I already did that in the “download_yolov3.sh” script. You could read the script for details.

First note this quote from the official TensorRT Release Notes:

Deprecation of Caffe Parser and UFF Parser - We are deprecating Caffe Parser and UFF Parser in TensorRT 7. They will be tested and functional in the next major release of TensorRT 8, but we plan to remove the support in the subsequent major release. Plan to migrate your workflow to use tf2onnx, keras2onnx or TensorFlow-TensorRT (TF-TRT) for deployment.

So going forward, using ONNX as the intermediate NN model format is definitely the way to go.

My yolo_to_onnx.py is largely based on the original “yolov3_onnx” sample provided by NVIDIA. NVIDIA’s original code needed to be run with “python2”. I made necessary modifications so that it could be run with “python3”. In addition, I added code to handle different input image sizes (288x288, 416x416, or 608x608) as well as support of “yolov3-tiny-xxx” models.

The onnx_to_tensorrt.py is pretty straightforward. It just calls standard TensorRT APIs to optimize the ONNX model to TensorRT engine and then save it to file.

My trt_yolo.py is very similar to my previous TensorRT demo, trt_ssd.py. I took the “preprocessing” and “postprocessing” code from NVIDIA’s original “yolov3_onnx” sample and encapsulated them into the “TrtYOLO” class. When run, the code would: (1) deserialize/load the TensorRT engine, (2) manage CUDA memory buffers using “pycuda”, (3) preprocess input image, run inference and postprocess YOLOv3 detection output. You could read source code for details.

I tested the TensorRT optimized “yolov3-416” model with the “dog.jpg” (with a dog, a bicycle and a truck) from the original YOLOv3 web site, and the model successfully detected all 3 target objects as expected.

As I’ve shared on NVIDIA Developer forum: link and link. The implementation of postprocessing function in NVIDIA’s original “yolov3_onnx” sample is not efficient, and thus causes the sample code to run very slowly.

More specifically, the original sample code calculates element-wise “sigmoid” and “exponential” of a vector (numpy array) with the following.

I replace it with the following numpy vectorized computation, and was able to speed up the postprocessing function significantly.

However, when I evaluated mAP of the optimized “yolov3-tiny-xxx” TensorRT engines, I found they were quite a lot worse (mAP much too low) than the regular “yolov3-xxx” engines. That why I said “I’m not sure whether the implementation is correct” in README.md. In case you manage to find the problems in my implementation, please do let me know.

YOLOv3 (608x608), with “mAP @ IoU=0.5” = 0.579 as reported by the original author, is a rather accurate object detection model. However, it does not run fast on Jetson Nano even when optimized by TensorRT. I think this would limit its applications in edge computing to cases where frames processed per second (FPS) requirement is low…