In this post, I’m documenting how I install and test SSD caffe on my Jetson Nano DevKit. The same steps/procedure should work for BVLC or other flavors of caffe.

Please make sure you have opencv-3.x properly installed on the Jetson Nano DevKit. For example, you could follow my Installing OpenCV 3.4.6 on Jetson Nano post and have opencv-3.4.6 installed by just executing a script I developed. (Note that SSD caffe cannot be compiled against opencv-4.x.)

Also, as stated in my opencv-3.4.6 post, you should set up a swap file on the Jetson Nano to avoid out-of-memory issues during the build process.

In addition, I’d suggest you to read the “Disclaimer” section of my Setting up Jetson Nano: The Basics post to understand my use cases of Jetson Nano. You might want to make adjustments to the script or use a different version of a specific library, based on your own requirements.

The script for building SSD caffe is in my GitHub ‘jetson_nano’ repository. You could clone it from GitHub.

Then execute the install_ssd-caffe.sh script. Note the script would clone SSD caffe source files into ${HOME}/project/ssd-caffe, and build the code from there.

During execution of the script, some of the steps (for example, installation of certain python3 modules) might take very long. If sudo timeout is an issue for you, you could consider using visudo to set a longer timestamp_timeout value. (Refer to my post Installing OpenCV 3.4.6 on Jetson Nano if needed.)

The building process would take quite a while. When it is done, you should see python3 reporting the version number of ‘caffe’ module: 1.0.0-rc3.

If you’d like to be able to import caffe within python3, you need to add caffe’s python module path into python3’s module search path. For example, you could set the PYTHONPATH environment variable as follows. (Or maybe put this line into your ~/.bashrc so that it’s done every time you log in.)

As you might have noticed, I’ve put a caffe time --gpu 0 --model ./models/bvlc_alexnet/deploy.prototxt command towards the end of the installation script. That serves as a simple test which gives us confidence the built caffe binary works properly. In addition, we could compare the numbers against Jetson TX2.

Doing inferening of a batch (10) of 227x227 images with Caffe/AlexNet, Jetson Nano takes ~3 times longer than TX2. I have to say I was a little bit disappointed when I first saw the numbers…

Anyway, I would do some more testing/benchmarking (especially with TensorRT) and document my findings along the way.

Now that we have SSD caffe working on the Jetson Nano, we could run some Single-Shot Multibox Detector model and do real-time object detection with a camera. For that, I use a googlenet_fc_coco_SSD_300x300 model which I trained with MS-COCO dataset before. That model could recognize the 80 classes of objects defined in COCO. Its accuracy (mAP) is slightly better than the original VGGNet based SSD_300x300, while it runs faster. You could download the model from my GoogleDrive link.

For real-time object detection, I’d be using my camera-ssd-threaded.py script.

Assuming the models_googlenet_fc_coco_SSD_300x300.tar.gz file has been downloaded and saved at ${HOME}/Downloads. Then execute the following.

As you could see below, I used a USB webcam for testing. The SSD model recognized Steph Curry on my laptop screen, but did not do too well for the other players. Otherwise, it also recognized the laptop computer and a few books. It took the googlenet_fc_coco_SSD_300x300 model about 200ms to inference each frame of image from the webcam. So it was running at roughly 5fps. 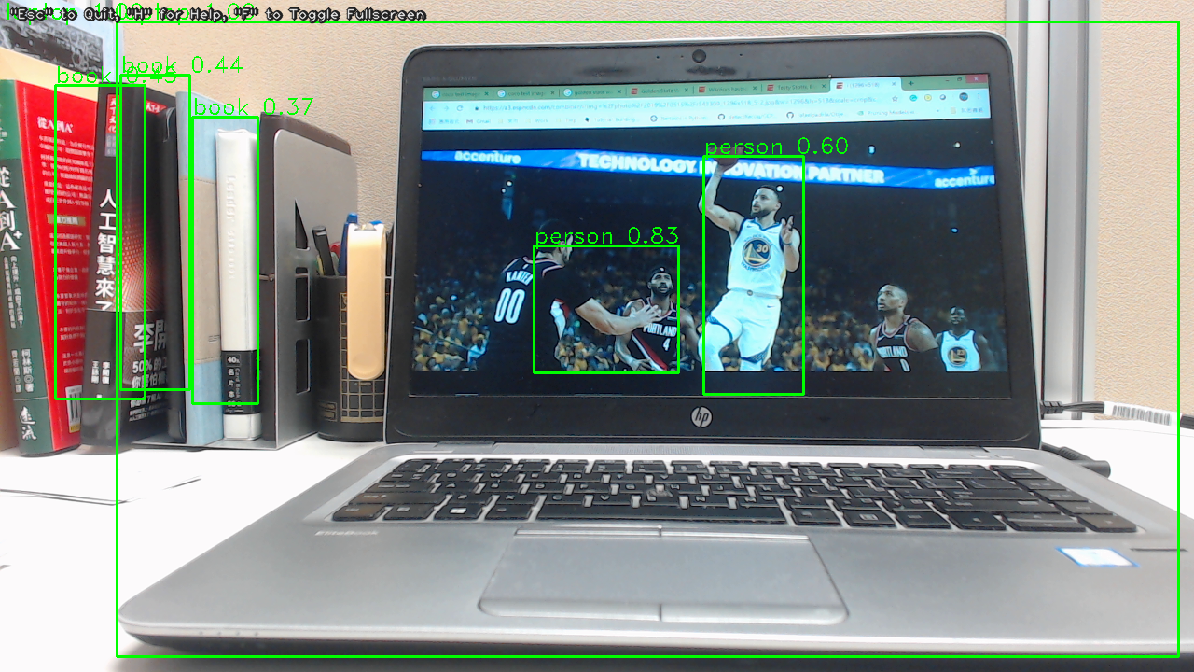